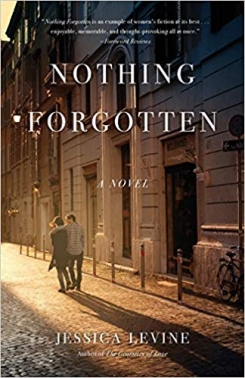 A Novel
By Jessica Levine
Published by She Writes Press
Buy from:

When Anna, now living in California, is contacted by the Italian lover she knew decades before, she recalls their affair and the child she gave up for adoption. As the episode returns to haunt her―threatening the life she’s built, including her marriage―the story moves back in time to her youth in Europe.

Rome, 1979. Anna, twenty-two and living abroad, is involved with a man already engaged to be married. When she meets and befriends his fiancée, she is forced to confront the moral consequences of her actions. But an unexpected pregnancy, an anonymous letter, and threatening relatives complicate the picture. A novel in which an unconventional heroine, far from home, is forced to reckon with the judgment of others.