Teatime for the Firefly 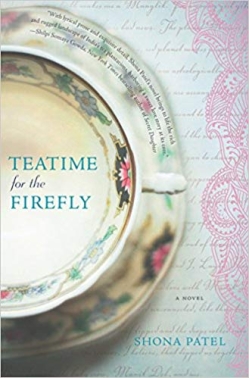 By Shona Patel
Published by MIRA
Buy from:

My name is Layla and I was born under an unlucky star. For a young girl growing up in India, this is bad news. But everything began to change for me one spring day in 1943, when three unconnected incidents, like tiny droplets on a lily leaf, tipped and rolled into one. It was that tiny shift in the cosmos, I believe, that tipped us together—me and Manik Deb.

Layla Roy has defied the fates. Despite being born under an inauspicious horoscope, she is raised to be educated and independent by her eccentric grandfather, Dadamoshai. And, by cleverly manipulating the hand fortune has dealt her, she has even found love with Manik Deb—a man betrothed to another. All were minor miracles in India that spring of 1943, when young women's lives were predetermined—if not by the stars, then by centuries of family tradition and social order.

Layla's life as a newly married woman takes her away from home and into the jungles of Assam, where the world's finest tea thrives on plantations run by native labor and British efficiency. Fascinated by this culture of whiskey-soaked expats who seem fazed by neither earthquakes nor man-eating leopards, she struggles to find her place among the prickly English wives with whom she is expected to socialize, and the peculiar servants she now finds under her charge.

But navigating the tea-garden set will hardly be her biggest challenge. Layla's remote home is not safe from the powerful changes sweeping India on the heels of the Second World War. Their colonial society is at a tipping point, and Layla and Manik find themselves caught in a perilous racial divide that threatens their very lives.