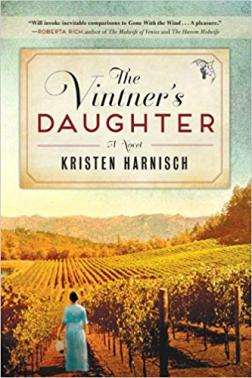 A Novel
By Kristen Harnisch
Published by She Writes Press
Buy from:

Loire Valley, 1895. When seventeen-year-old Sara Thibault's father is killed in a mudslide, her mother sells their vineyard to a rival family whose eldest son marries Sara's sister, Lydia. But a violent tragedy compels Sara and her sister to flee to New York, forcing Sara to put aside her dream to follow in her father's footsteps as a master winemaker.

Meanwhile, Philippe Lemieux has arrived in California with the ambition of owning the largest vineyard in Napa by 1900. When he receives word of his brother's death in France, he resolves to bring the killer to justice. Sara has travelled to California in hopes of making her own way in the winemaking world. When she encounters Philippe in a Napa vineyard, they are instantly drawn to one another, but Sara knows he is the one man who could return her family's vineyard to her, or send her straight to the guillotine.